After the various problems caused by the accumulation of dirt and those related to the hard drive, the screens of LCD are the components that give problems on computers laptops. A cracked screen that does not allow you to see a movie correctly, for example, does not mean that your laptop is no longer useful and you have to throw it away. For most laptops, a screen replacement is cheap and takes no more than an hour at most.

With certain basic knowledge, replacing a damaged laptop screen is an effective way to save money, because a lot of portable technical service stores charge a sum that sometimes suggests that it is better to buy another laptop. But this is not the case. 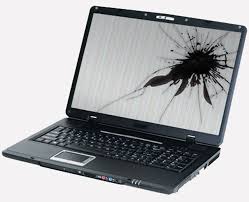 As a first step, take a complete look at your laptop and check to make sure that the screen effectively requires a replacement.

In case the graphics card of the motherboard does not work, for example, you may be wasting time and effort in replacing a screen that does work. Also, if the laptop has recently been dropped or has suffered physical damage, it is also recommended that you check for other visible damage.

To ensure the operation of the graphics card, you can connect a PC monitor or TV to the laptop, since almost all have a standard blue VGA output (D-SUB) and/or an HDMI output.

If the image is displayed correctly, it is likely that your graphics card is in good condition and it is the screen that is causing the problem.

Otherwise, if you do not see any images, keep in mind that some laptops require that you press certain function keys on the laptop to activate the external screen output. If after that the video is still not displayed, it is likely that your graphics card and/or motherboard is broken, instead of the screen.

If the notebook’s outputs to another screen are successful, use the laptop for several minutes to make sure that the keyboard and other components are functioning normally.

However, the general steps do not work for all these laptops. Some will require more work or a different process to replace the screen, such as accessing the motherboard by opening the laptop’s main case.

How to choose a laptop replacement screen

Before buying a new LCD screen, it may be a good idea to try to remove the broken screen first, to make sure you can make the replacement.

If after following the first steps, the process looks different for your laptop, it is recommended to search on YouTube and Google, or use a repair professional to get more help on your brand and exact laptop model.

Finding a replacement screen is typically easy, and you will not have to pay the crazy prices that the manufacturer usually wants. Simply look in an online store, such as Amazon or eBay, with the model number of your laptop.

When you are buying a screen, most sellers will alert you to compare the specifications and how the cables from the current screen to the laptop are connected.

This is another reason for you to open the damaged screen before requesting a replacement, as this will ensure you exactly what screen you need.

However, if the seller claims that the screen is compatible with your laptop model, it will generally work.

How to repair the damaged laptop screen 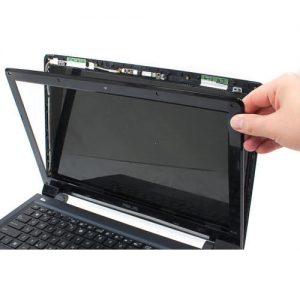 Make sure, before starting the replacement, to have the right tools. This is what works for most laptops and thus correctly changing the damaged screen:

These general steps work for most laptops: 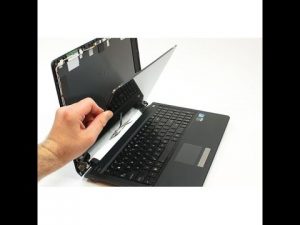 Check that the laptop is not connected to the AC adapter. Also, remove the battery.

Use a sharp, pointed object, such as a pin, a card or a needle, to help remove the stickers from the cover without damaging them. Put it between the edge of the cover and the angle, and then remove the sticker. Once removed, place the stickers in a safe place, with the sticky side facing up to make sure there is enough adhesiveness when you replace them.

Use the screwdriver to remove the visible screws. You will see that some screws are easily removed, while others require more work and patience. However, moving the screen to the correct position usually exposes the screws enough to remove them.

Start carefully removing the bezel from the back of the screen case. Place a fingernail or other thin element in the crack around the outside of the screen. The bezel is usually fixed to the back box with plastic clasps, so do a bit of force to separate it, but not too much. You will hear how the closures unhook when doing a bit of force.

After you have unhooked the bezel from the screen, it may or may not be easy to dismantle. If it is not, it is likely to be stuck around the hinges on the screen. Moving the screen position up or down, exerting a bit of gentle force if necessary, you should release it completely.

When the bezel is completely removed, you will find the LCD attached to a metal frame on the right and left sides. Remove both screws located on the top, one on each side, that hold the parts of the molding frame to the rear screen housing. Now, you should be able to lift the LCD (with the frame parts attached) slightly away from the rear screen case.

On each side of the frames, remove the screws that hold it to the LCD screen. Almost all laptops have three screws on each side; however, on other equipment, the screen can be secured to the frame parts using adhesive tape on each side.

Now you should be able to put the LCD face down on the keyboard. Be careful not to put excessive force on the video cable connected to the back of the LCD screen.

When you have completely removed the broken LCD, simply place the new one upside down as you have done with the previous one. Reconnect the video cable to the connector and place the cables and any tape as if it were the old one.

Place the new screen up on the side frame, and secure it again as before: usually three screws on each side of the frame parts, and then a screw on the top of each frame to secure it to the rear screen case.

When you get to the point of replacing the bezel, you just have to align it and push/squeeze the bezel back into the snaps of the back screen case. Before replacing the bezel screws, make sure that the bezel is fully inserted in its place and that there are no cracks around the edges of the screen housing. To finish, use that pin or needle securely to replace the adhesive covers of the screws.

The screen of a laptop is one of the most likely components to fail. If the screen stops working, do not assume you’ll have to search your pockets to buy a new laptop. Replacement screens can be purchased for most models, and the failed screen exchange is usually a much cheaper option than buying a new computer. As we have seen, you can replace the screen of a laptop at home with some basic tools.

If everything went well, now you should have a new and shiny laptop screen. Replace the battery and try it!