What is avast email signature? 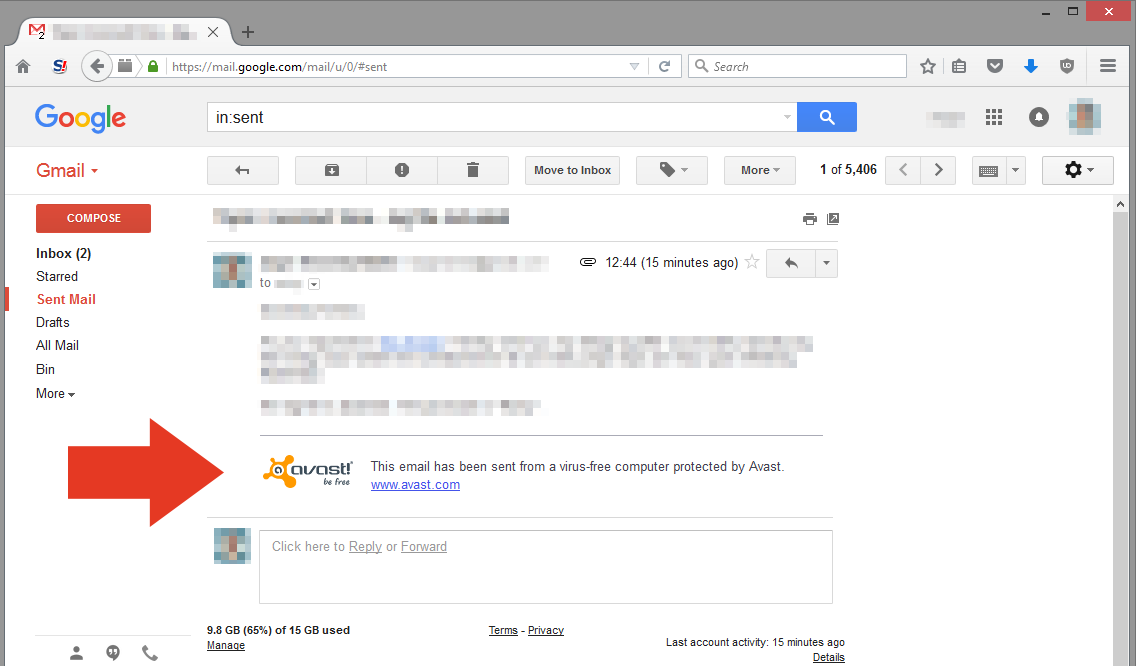 Just recently, a couple of weeks ago, I ran into one problem that I could not immediately solve. The problem lies in the work of the latest version of Avast Antivirus, which automatically inserts an annoying avast email signature into every outgoing E-Mail message.

I thought that this problem could also affect other Avast users, and since I found a solution to the problem, I decided to share it with you!

For a start, a little background to the emergence of the problem, the solution of which will discuss in this article …

How this signature affects you?

For more than a year, I have been using the free version of Avast Antivirus, which I put on all family-owned computers, and, in principle, am happy with everything.

You do not need to buy anything, pick up keys, and steam with the reset of activation, as is the case with any paid antivirus. At the same time, the antivirus protects well, since in so much time I have never noticed any problems with the system and suspicious actions that could somehow suggest that I have virus activity in my computer.

Well, in general, I did not observe any problems with the use of Avast on any computer until recently.

The later version of avast

In general, the next version of Avast Antivirus was released and, of course, I updated all the computers that I maintain to this version. This is the 11th version (at the moment I have is 11.1.2245, which was released on December 1, 2015).

Updated, as usual, I did not notice any problems as before … However, literally on the same day, after updating Avast to the latest version at the moment, I still saw something new for me.

When I sent an email to anyone, right before my signature, avast email signature was inserted at the end of the message:

This message was sent from an uninfected computer protected by Avast. www.avast.com

Strange, I think … Previously, this had never happened before, whatever version it was updating its antivirus. I guessed that it was easy to turn off this signature in the Avast settings.

But I didn’t want to poke around there, and therefore I didn’t sweat at first … Then I began to notice that when I looked at the message, the message first fell on the signature.

Like distracted by it! Then I also think: “Damn, and those with whom I communicate at work and personally via e-mail, after all, Avast’s signatures in my messages certainly pay attention to this and surely it can annoy someone …”. I think it was like that. Because after a couple of days, the beginning began to annoy me too.

Engaged in finding a solution to the problem. Immediately I got into the Avast Antivirus settings, found a section on email protection there and saw the included option: “Insert note into a” clean “message (outgoing) ”

Previously, in all versions of Avast, this option was always disabled by default, so I did not notice such a signature in emails.

Well, I think here is the solution found in a minute! And FIG! I removed the check mark from this option, saved the settings, and immediately ran to check the result. To myself, from my mailbox, Gmail sent a test letter, and again, I see Avast’s signature before my personal signature.

Well your mother, I think, what’s wrong again? Returning to the settings Avast, and there is a tick in place. I try again, yet the same story. I remove this tick, save the settings, and she still in place, infection, gets up!

And then I seem to be in a stupor … I don’t know what to do. It was thought then that Avast is now for everyone who uses the free version, will forcibly include this option without the ability to turn off to advertise their product.

But on the other hand, I think, and if everything is as I believe, then why did this option not be removed from the settings at all, what is it doing there ?!

And since I didn’t have any options in my head, I went to Google in the old manner, to see if it’s not just me that I was worried about Avast’s signature in the messages and what solution there is or is it a glitch.

My research on this email signature

I climbed, climbed on various forums and blogs, found a similar problem with people, and all the “gurus” recommended simply unchecking the option “ Insert note into a” clean “message (outgoing),” which I already tried. And I never found a solution to my problem.

I was already thinking about changing the anti-virus for the future, since such a bright Avast signature in the E-Mail messages sent by me didn’t suit me at all, and some of my interlocutors, I think, too if I do not find it, then in the future I will change this antivirus to another free one. And the solution was found, and here it is …

How to remove this signature from outgoing E-Mail messages!

The solution is simple. The fact is that in their latest version, the developers in Avast antivirus added another option “Enable Avast email signature,” which for some reason was not stuffed into the email protection settings section, but into the general settings of the program:

And only by turning off the option regarding E-Mail messages in the general settings, it was possible to disable the Avast signature in the email protection settings altogether.

I would not even have guessed to see it at once, and even more so a newbie! It may be calculated that the signature will now be enabled by default, and not everyone will be soaring about it, and beginners, in general, will probably not be able to turn it off. Moreover, the option is called in English.

So, to disable the Avast signature in all outgoing messages via E-Mail:

Done! Having done these steps, the digital signature has finally disappeared from my outgoing E-Mail messages.

Since I had such a snag with Avast, it means that other users probably also have it, who are also looking for solutions to this problem after Avast is very popular and uses it a lot of people.

That’s all. Happy New Year 2016 to you! I wish you all good luck in the New Year, happiness in every sense, good health, financial well-being and, in general, all the best!